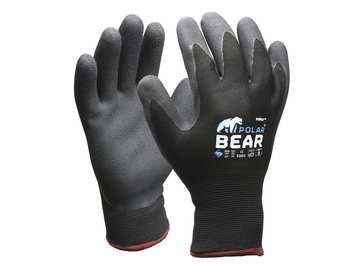 The standard for certifying protective gloves against mechanical risks. The numbers under the shield represent (L to R) resistance to abrasion, cut (coup test), tear and puncture.

Updates the EN 388:2008 standard. It continues the previous test’s methods with some alterations including a change to the way the coup cut test is carried out (the second figure giving the coup cut resistance rating may be expressed as 'X' if the glove is not tested under the coup test or if the rolling blade becomes blunt before the test is completed). It adds a fifth letter (A to F, with F being highest) for cut resistance using the sliding blade TDM test and a sixth letter to indicate impact protection, expressed as 'P' for pass. If the glove is not designed to provide impact protection the sixth figure is left out, or sometimes 'F' (fail).

Gloves that give protection from cold. Numerals under the shield represent performance against (a) convective and (b) contact cold down to -50°C, as well as (c) water permeability.

View your shopping basket or browse other items.

As a private, 100% New Zealand owned company, we pride ourselves on offering competitive prices and exceptional customer service.

If you’re looking for expert knowledge and quality products, we’re here to help.